I woke up this morning expecting another long day of hauling ships and modules for people on the long trip between Berta and Ikami. To my utter surprise however, the senior crew of White Talon Enterprises had planned a roam around our new space. I was ecstatic. Our first roam in our new home...

Unreal proceeded to send me an eveMail  with both of his fits for a rupture, I needed to make a shopping trip, and quick.

I used the inner-station communication system to send a double time order to both my rupture's crew and Scotty in docking control to move the ship into the hanger and get it prepped for flight.

By the time I arrived my wonderful crew had the ship all ready. I quickly climbed into my pod and interfaced it with the ship, thirty seconds later I had laid in a course and we were on our way.

In route I purchased most of the modules I would need to complete the fit, one of them I had in my hanger back at the station. I also bought some new skillbooks I would need in the coming months, and christened the ship, Death in a Rocketcan.

When we arrived at Jita 4-4 I was stunned at the sheer number of people. I had heard stories about the congestion found only here, but I never imagined there would be so many. There were so many, I was uncomfortable and fit my new modules and loaded the skillbooks as quickly as I could and left the system.

We arrived back in Ikami with just minutes to spare. I docked, fitted the last module from the Paul's cargo bay (I haven't had time since the move to unpack) and loaded the ammo I would need. Since I was in a hurry I used the station's automated loading device.

Things went great at first we caught and killed a drake http://wte.newbastion.com/?a=kill_detail&kll_id=43 early on. Thats when I found a problem, all my ammo was gone. All at once I realized what I had done, I had made a mistake, I had accidentally loaded the spare ammo into Paul's cargohold instead of the rupture's. To make matters worse I had forgotten to unload the skill books. I was out of ammo, I had to use only my flight of small drones, and my electronic warfare modules for the rest of the night and I was flying around with a couple million ISK worth of books.

We traveled all over the Geminate region, killing anything we could catch, including a Hurricane and a Rapier. Near the end of our roam we narrowly escaped a roaming battleship gang consisting of no less than 6 battleships. We decided that one would be a little too tough in a cruiser/battlecruiser fleet, and made the last few jumps home.

After seeing all the action in my new home, I don't have any regrets leaving OUCH, this was the right decision, Dad was right. Now if I could just remember to bring bullets, instead of books.
Posted by Maxwell Muhilo at 1:29 AM No comments:

The first part of the trip was uneventful. I was informed over Alliance comms that a large number of OUCH students were making the same move I was. Thirty-five jumps through high sec space, most of it through Amarr territory. Apparently we were all feeling the same thing about OUCH. We agreed with, and respected what it stood for, but we felt that WTE was the place for us. Who knows, others may yet move on again.

After a long trip through gold plated skys, I finally made it to Ikami VIII-12, WTE's regrouping area for the OUCH fallout. After I docked the ship I bid the crew a temporary farewell over the ship's comms and had my pod transported to the cloning lab, I was about to make my fifth total clone jump back across the galaxy to my old home, back to Rens.

Once back in Rens I immediately had the station crew bring out my packaged Republic Fleet Firetail. While that was underway, I sent out a broadcast to the ships crew that had been enjoying the high life of a hub station. Once the Firetail's crew arrived I had them assemble the ship and get it space worthy while I did a little bit of last minute business, selling off the rest of my possessions in Rens, save for that one implant I've been saving for a special day.

In twenty minutes we were ready to fly, I had never seen a Firetail so close before. Apparently I had so proved my loyalty to the Brutor Tribe, that they were willing to give me one of the Fleet's most prized class of frigate. I was transfixed by the shiny wings that reminded me so much of a hummingbird. I ran my hand down the side of the ship, feeling the cool metal that was so full of power, trying to think of an appropriate name. I finally settled on Serenity, I don't know why, it just seemed...right.

So I boarded with my crew of three, and we set off for Berta, again.

When we arrived I had the crew disassemble the Serenity again for transport and ordered them catch an Interbus shuttle to Ikami. While they worked at their task, I had my Wreathe class hauler brought into the next hanger. When the Serenity was loaded, I gave Paul a video call to make sure everything was in order for my next flight through the very shiny Amarr territory.

About half way back, we were having some technical difficulties, so I steered the ship to a planet and cloaked. Ten minutes later, we were up and running again, the crew reported some minor computer trouble. The rest of the trip was completed without incident.

When we arrived back at Ikami, I washed off and went to my chambers for some much needed rest. A few hours later I got a buzz from Jaz about what was going on. We talked while I organized some moving plans with some other OUCH members that were moving. It looked like I was going to be making another trip today.

I got in touch with Gah'Matar about moving a rupture class cruiser and Dorno about moving......something, he never did say exactly... No matter, as long as it fit in my cargohold and they made me pay as much collateral as they were comfortable with, I was fine (except for the fourth trip through Amarr). A hardy applause for all the ship crews that are somehow able to keep up with my manic movements across New Eden.

A new beginning is on the horizon, what it holds in store for me, I have no idea. One thing I do know is that, whatever it is, it's gonna be fun!
Posted by Maxwell Muhilo at 1:51 AM No comments:

I woke up this morning with my mind made up, I was moving up to The Forge today, if it killed me...on second thought maybe not, I've only had that experience once and it is very disorienting to wake up 15 jumps away in another region. Especially since it was my first time being podded. Still trying to figure out what all that light was about.

I shivered as that memory crossed my mind while I was walking to the mess hall on the Minmatar station in Berta. I immediately forced it out of my thoughts. I wasn't going to let that sort of thinking ruin what could be my last real Matari meal. There aren't very many Minmatar stations up in The Forge. I don't mind Caldari food, mind you, but there's just nothing like a hearty Minmatar breakfast.

After a delicious breakfast, and a final "So long" to the pleasantly plump Matari hostess, I headed to the hanger that berthed my mammoth hauler (Sujanra, brother, if you're reading this, I did mean that as a pun) Paul III. When I arrived, I stepped into the control tower to talk to Scotty.

I walked down to the deck where I met with Paul III's crew chief, who interestingly enough, is named Paul. Truth be told, he runs all my haulers, I let him hire who he wants to work aboard the others, but the ships are all his responsibility. That's partly why I name them all Paul. He's so proud of those ships.

"Are we all set for the move? All the ships, and less expensive modules?"
"Sir, yes, sir!" He almost shouted with a sharp salute.
"Paul, we aren't working for the Brutor anymore, it's not necessary that you stay so formal." I replied, exasperated.
"Sorry," he said sheepishly, "habit." He's been working hard.
"It's ok. Is the cloak in full working order? I know we are going through high sec, but just in case, it is Amarr space, you know?"
"Yes sir. We checked it this morning. Scotty over there almost let a Tengu dock in on top of us." And then under his breath, he added, "crazy old man...seems like he's everywhere, can't get away."

I could barely contain a guffaw as I ordered everyone on board and undocked this lumbering beast for the first time this day...
Posted by Maxwell Muhilo at 12:52 AM No comments:

For the last week I have been a member of OUCH, a 0.0 space training corporation, while here I have found many good people. Including Jaz'minh, Gah'matar, Planetary Genocide. People I hope to spend time with in the future. As it turns out my new university is going through some rough times.  Our alliance mates over in White Talon Enterprises are moving north to The Forge (oh geeze, Jita) and invited OUCH to follow, with moving assistance offered. I was all for the move (Jita, bedarned), so when Black Claw decided it wasn't a good idea, I was presented with a decision. I didn't know what to do. WTE sounded like the place for me, they were Caldari, sure, but this group were sympathetic to the Minmatar, my people! They even had a Matari man leading the industrial division.

On the other hand, OUCH offered plenty of learning opportunities that may or may not be found elsewhere.

As I pondered this question, I thought "Why not get some work done?" So I undocked my second rifter out to kill some Angel scum. As it turns out this was a bad idea. After I knocked out one warp disruption bubble, I found me some targets. Unfortunately, since I was shooting them with other things on my mind, I forgot to keep an eye out for hostiles in 0.0. A costly mistake. A tengu and a falcon caught me and tore the Cargo Container to pieces. Managed to save my pod and get back to home base in Berta without being subjugated to the cold, hard vacuum  of space.

By the time I had washed all the pod gunk off of my body, I had made up my mind. Dad had always told me that I should do two things: "Go with your gut." and "Make your own decisions." I was going to join forces with Calculon and the others in White Talon Enterprises. 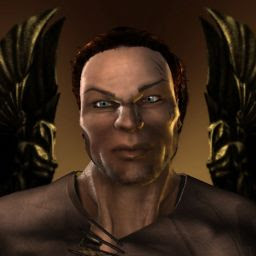 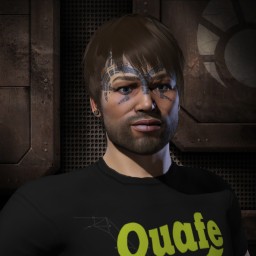